Whose signature is missing? That would be James Comer. He has TWICE refused to protect American sovereignty from foreign rules, committees, and courts. His definition of "fair trade" puts American business under the same "fair" rules made by foreigners. We get one vote out of 12. Once gaining control, you know it will only get worse.

Update January 23, 2017 - President Trump dumps the TPP! This was a major concern of ours during the recent campaign because it was a direct assault against American sovereignty. Mich McConnell, Paul Ryan, and our KY rep James Comer will do all the spin necessary to appear on Trump's side for now. Thank you, President Trump for pulling us out of that potential disaster. 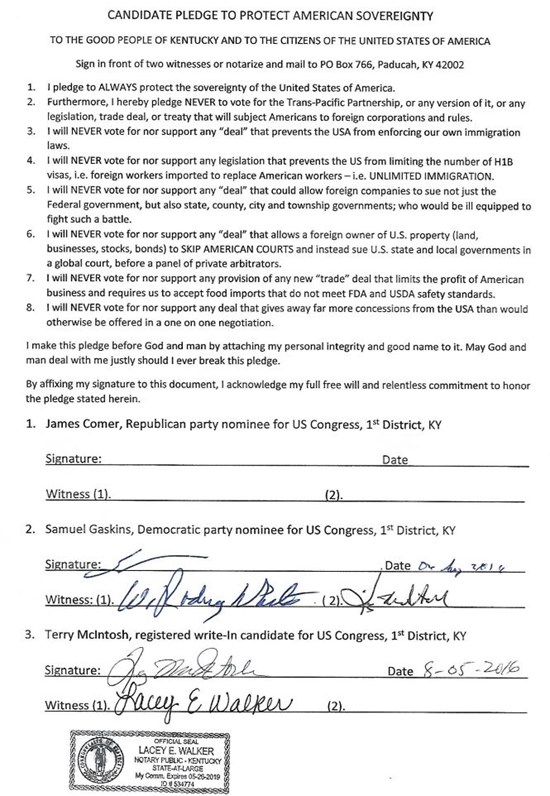 Refusal to sign such an important statement is a powerful warning not to trust the candidate's real agenda. There is no excuse. Voters need to know what a candidate will do after election day. Failure to make a public pledge is a resounding 'No." Sen. Mitch McConnell says, "“But the good news is, the TPP doesn’t just go away…. If it’s not dealt with this year, it’s still there to be dealt with next year,” he added, hinting that the United States would not walk away from the deal — but was also in no rush to sign it and give President Obama “bragging rights.”

Mr. Gaskins, the Democratic nominee, did not hesitate to sign the pledge with me. I very much appreciate Sam's putting the country ahead of big business and "free" trade deals that subject Americans to foreign rules. It will kill Kentucky farmers and other job losses. Even though we are opponents, we agree that the country must be preserved. Then we can argue about other differences. We are both combat veterans and perhaps we understand better what it's really all about.

Mr. Comer said one thing and did another in political fashion. He walked away talking about his support of "free" trade. He correctly supposes that most voters don't know what's in the deal and "free" trade sounds good on the surface. There is nothing free about the TPP. When he says that he wants to make sure it is fair to American workers, one has to wonder by whose standard of fair he is referring to - American superiority or global mesh? He implies that he will sell out to foreign rules listed in the pledge if everyone is on the same playing field as equals. In other words, our nation's sovereignty is at risk with Mr. Comer in Congress.

Political double speak and manipulation by candidate Comer does not excuse him. To say, "The TPP needs to be re-negotiated" is misleading. If Mr. Comer will sign the pledge, I will be thrilled to delete this post and report on it. Protecting American sovereignty is more important than making points with a campaign issue. If he signs the pledge, I lose all my thunder, but that's fine. This is about protecting American interests.

It poses a major problem for him, though. If he commits to protect the country from big business takeover, he breaks with his mentors who are for it. He has to decide whose side he is on - the people of Kentucky and the USA, or special interest groups. So far, it appears that special interests win out in the Comer camp.

It was a long day in Fancy Farm from 10 am to close. Rejected by organizer Mr. Wilson for the third time who rudely refused to allow yours truly, a Federal Candidate, to speak (Comer's campaign finance manager lives in Fancy Farm), ignored by local media, braving the scorching heat and occasional rain standing with the people of Kentucky outside of the pavilion, I was finally able to reach Comer in spite of near exhaustion. One has to persevere to get to the truth. Know your candidate and make him accountable. We cannot lower the flag and take what they want to give us.

Mr. Comer did an immediate flip-flop. He said that he would sign, "absolutely," then said he was big on free trade, and then refused to sign the pledge after two more attempts. If he was trying to do a little spin, he failed. By saying that he was big on "free" trade is a clear sign that he is onboard with Sen. McConnell and Speaker Ryan. Politicians are professionals at saying things to avoid commitment when they know they will vote the other way. There is nothing "free" about the TPP worked out by President Obama. It's just a word they use to fool the sound-bite voter.

Both McConnell and Ryan have been commended by President Obama for their work on trade deals.

McConnell and Obama working together Also see pledge challenge below as served on Aug. 15, 2016.

Always make your candidate accountable. Hold his feet to the fire. Do not trust any well crafted excuse. There are none when it comes to American sovereignty. Someone needs to tell Mr. Comer to sign this pledge. You can do it with your vote. Tell him to protect the freedoms and liberties bought and paid for by the blood of patriots. I would be thrilled to change this post. If he won't do it, watch out!

And why wouldn't he? The pics tell the story. Mr. Comer is a "Mitch-Ryan" man and in agreement with them. In my opinion, anyone who is willing to sell out American sovereignty is not qualified for office. 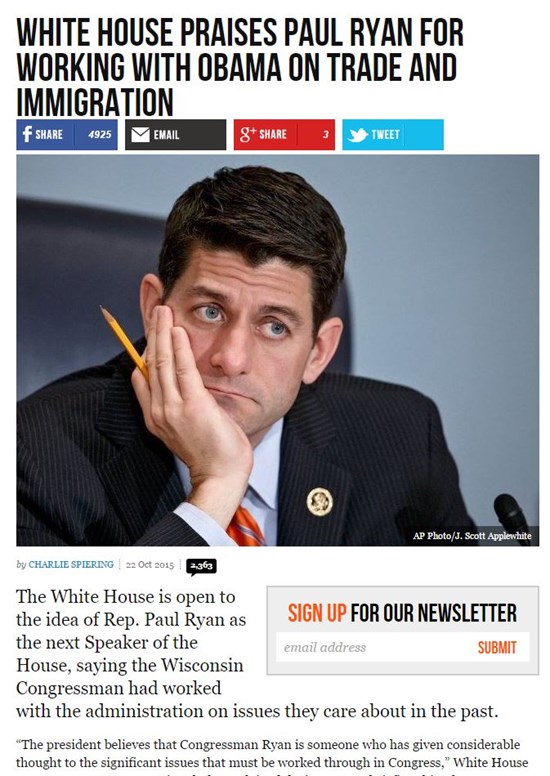 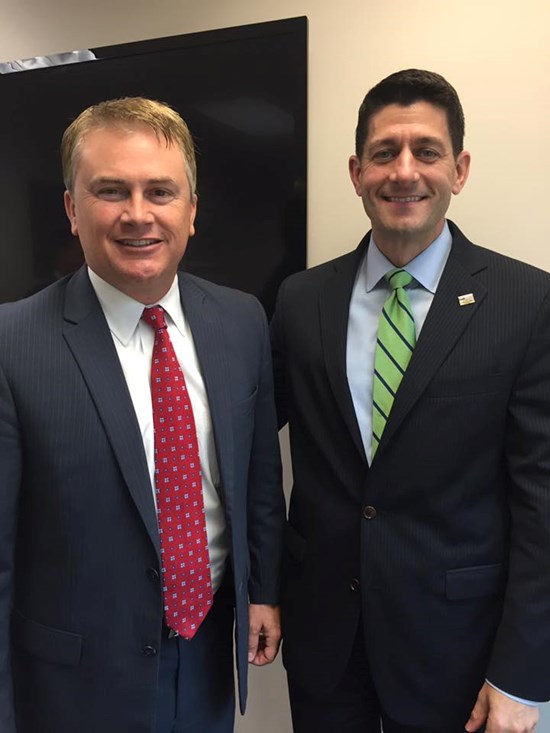 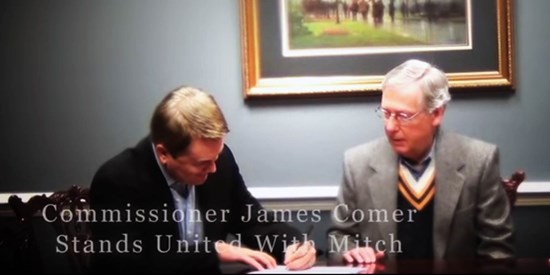 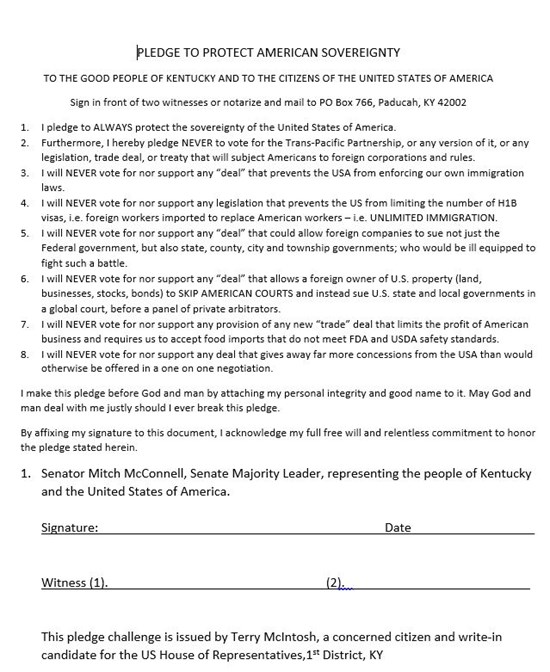 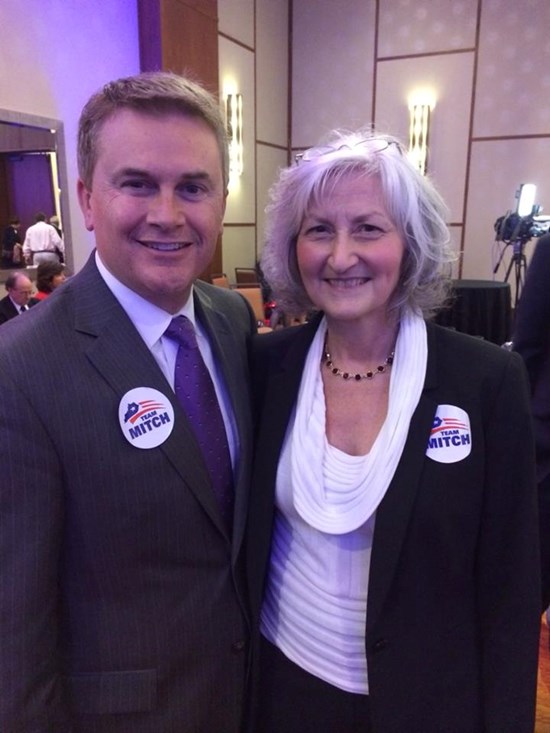